The Bird with the Crystal Plumage (Morricone, 1970) 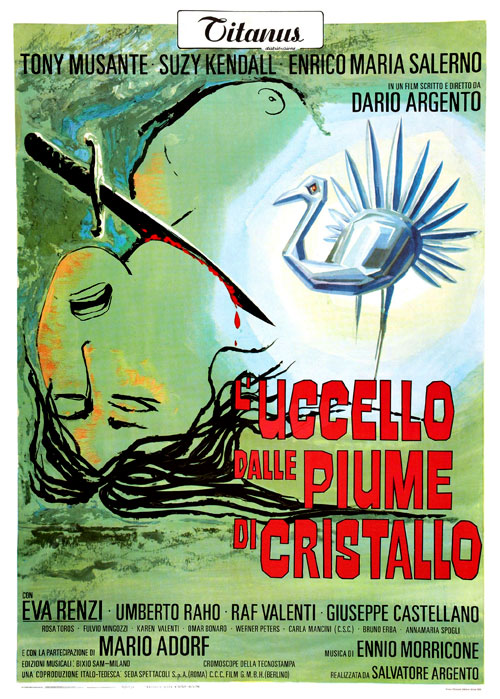 For this film, director Dario Argento's first feature, Morricone developed two very different compositional tactics: a female lullaby ("la-la") theme song, and a semi-improvised, atonal "indeterminate" piece, which uses free-floating rhythms to create a sense of unpredictable tension.  The lullaby "Crystal Plumage theme" is first heard in the opening track, and is mainly used for flirtatious sleuthing scenes between Sam and his girlfriend Julia back at their apartment.  The improvisational tension theme is titled (appropriately enough) "Phrases Without Structure", and is used for all scenes featuring the killer's presence (POV stalking scenes, off-screen phone calls, gloved hands preparing knives, etc...).  Most likely, several versions were recorded and Morricone and the music editor used the material as library music to fit the dramatic contours of various scenes.

"Fraseggio senza struttura" (Phrases Without Structure) is basically built on these gestures, or "phrases" (though not all are present in every version):
It's possible that the musicians were provided with partially-notated elements without rhythmic markings, and were then cued in and out by conductor Bruno Nicolai (that's my guess anyways).  In any case, the score for this film is strongly flavored by Edda Dell'Orso's haunting, wordless vocal performance, as well as the floating, improvisatory statements from the studio "jazz band".  On the album, tracks 2 and 4 are source music tracks, and these stand out in stark contrast (as "normal music") to the rest of the underscore.

In 1971, Morricone used a similar technique when scoring Argento's second film, "Cat O' Nine Tails".  In this film, Morricone incorporated clipped, syncopated bass grooves (with simple drum rhythms on brushes and hi-hat) to support newly-composed selections of rhythmically-floating "phrases" (atonal themes/motifs, ostinato patterns, ambient textures, etc...) using similarly unconventional instrumentation.  This concept of groove structures to support avant-garde thriller textures would continue into many more classic Morricone-scored Giallo films (such as in Massimo Dallamano's 1972 "What Have You Done With Solange?") and have a lasting influence on the genre itself.