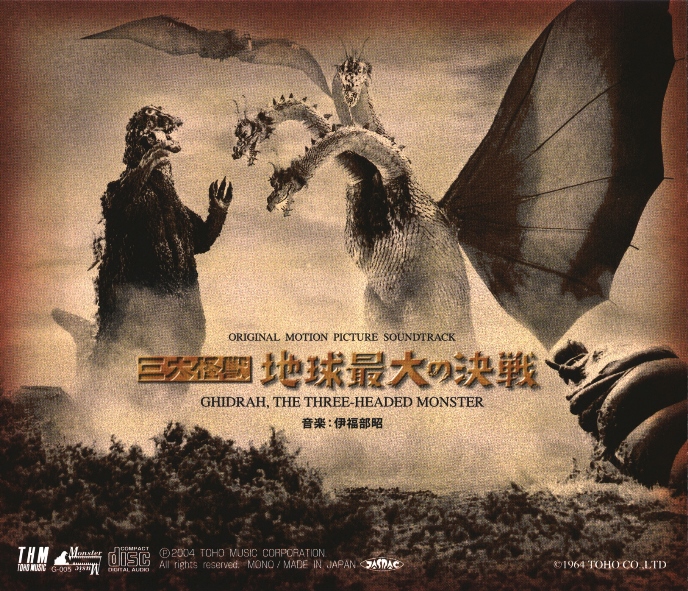 1964 was a productive year for the Toho giant monster franchise.  In April of that year, "Mothra vs Godzilla" was released to great success both domestically and abroad.  At the end of the year, just 5 days before Christmas, the sequel (and 5th Godzilla film) "Ghidorah the Three-Headed Monster" was released ("三大怪獣 地球最大の決戦", "Three Giant Monsters: The Greatest Battle on Earth").  In this entry, Godzilla's destructive nature became somewhat rehabilitated, due to the emergence of the greater threat, King Ghidorah, who eventually grew to become Toho's "big bad" of monster movies.

In this sequel Mothra returned again with the "little fairies" (Shobijin), and Rodan (introduced in 1956 in his own film "ラドン"/"Radon") made his first return appearance to the screen.  Despite the Japanese title of "three giant monsters", the audience actually got four giant monsters, with three even having starred in their own solo films (I suppose King Ghidorah can't really have a solo film, since then everybody would just be killed).  Despite the relatively short running time, the resulting film is actually pretty good, and the monsters do not overstay their welcome (for some, though, the entry of some comedic, "kid-friendly" elements signaled the beginning of the end).

In the film's plot, a traveling Princess goes missing, but then resurfaces as a doomsday prophetess predicting the arrival of King Ghidorah, who will destroy the world.  Meanwhile, Rodan and Godzilla wake up/swim ashore and develop a rivalry, and a scientist near Mount Hida observes a giant meteorite give birth to King Ghidorah (who immediately goes on a rampage).  The Shobijin fairies, visiting Japan for a TV appearance, learn of the danger and call forth the larval form Mothra from Infant Island (the larva's twin from the previous film had died in the interim).  When young Mothra arrives, she (?) asks Godzilla and Rodan to set aside their differences so that they can together defend the Earth from King Ghidorah.  They resist at first but eventually change their mind.  At the same time, an assassin from the Princess' home country hunts the doomsday prophetess.  In the end, the assassin is dispatched in a landslide, and Kind Ghidorah is driven away by the collaborative battle tactics of Godzilla, Rodan and Mothra.

Composer and national treasure Akira Ifukube came back here for his 4th Godzilla score and in this film added several new themes to his already iconic repertoire for the giant radioactive monster and his friends.  With the creation of Rodan and Ghidorah's themes in this film, the "classic" palette of themes and sounds of a Godzilla monster movie was firmly established.

The score to Ghidorah, the Three-Headed Monster has seen a couple of releases over the years.  The below table is based on the main score tracks from the Godzilla Perfect Box 1, Disc 6, which also includes 8 bonus tracks of alternate takes.  For the sake of space, below I often only indicate the themes when they occur, but not the details of the orchestrations.  Even though there is lots of repetition of themes, the changing arrangements (with and without electric organ, harp, cymbals, timpani, piano, bass clarinet, strings, etc.) keep things relatively fresh.