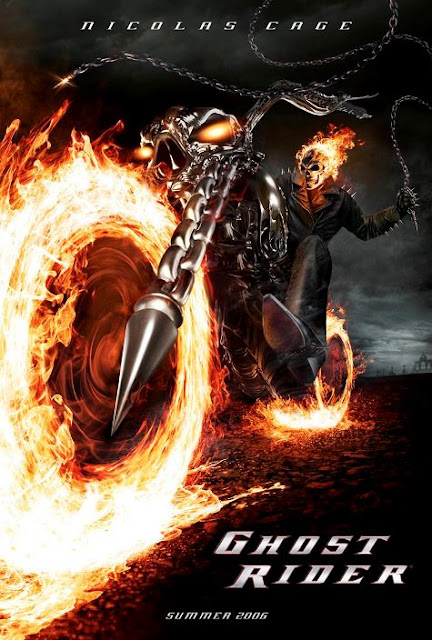 The 2007 film "Ghost Rider is kind of a guilty pleasure.  It's probably not regarded as a "great" film, but it does have some enjoyable over-the-top Nicolas Cage mannerisms, as well as some unique flaming motorcycle sequences.  Additionally, it's one of the earliest examples of the current trend of heavy metal-driven scores (see Mad Max Fury Road). 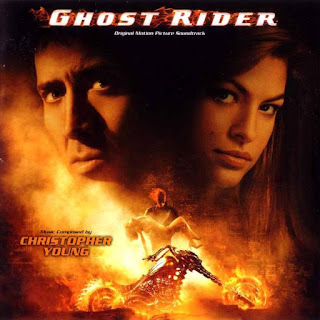 The film includes several licensed rock songs in the first half (mostly used as source music for bike-show stunts), but is later dominated by a guitar/drum-driven score composed by Christopher Young, who refers to this score as "industrial/gothic western".  The score release includes about an hour's worth of Young's music, but sadly leaves off all of the licensed songs, including the perfectly-chosen "(Ghost) Riders in the Sky", originally written by Stan Jones in 1948, later made into a popular rock song by the Outlaws, and here performed by Spiderbait.  This song was used in a visually-striking sequence where the two Ghost Riders (Cage and Sam Elliott) travel across the desert on flame-cycle and flame-horse towards the final battle (as well as over the end credits).

The score is arranged in collections of cues which rarely follow the film's chronological sequence - why labels do this I do not know, it never works as well as a chronological presentation in my opinion.  The official titles often have nothing to do with the cue's intended film sequence either.  Nonetheless, Ghost Rider" is a pretty fun score and has some very enjoyable electric guitar grooves (did I mention "guilty pleasure"?).  Members of the recording ensemble include the drummer from the metal band White Zombie, and two guitarists from Trent Reznor's industrial rock band, Nine Inch Nails.

There are 3 main themes featured in the score, the Ghost Rider theme (gothic and romantic, often also used as fanfare-ish fragments or as ornamental elements to a simpler figure), the string/acoustic guitar/clarinet "pastoral theme" (love theme), and the "Blackheart Beat", which is an ominous, chromatically descending 3-chord guitar riff.  A few other more minor motifs appear, most notably a pretty cool little trumpet figure.  The score also features generous helpings of gothic choir and orchestra-based ambient textures (as opposed the synthetic type favored by composers such as Hans Zimmer and Tom Holkenborg).

The cues in the soundtrack are in non-chronological order, but a film sequence from the released cues above would go something like this:

The notable rock songs in the film (mostly used as source music) include: "Tush" (ZZ Top), "Crazy Train" (Ozzy Osborne), "Superstar" (The Carpenters), "Ride of the Valkyries" (Richard Wagner, Royal Philharmonic) and "Who Do You Love" (Bo Diddley/George Thorogood and the Destroyers), as well as the aforementioned "(Ghost) Riders in the Sky" arranged by Spiderbait (who actually wrote 3 other very cool cues for the film besides this one).