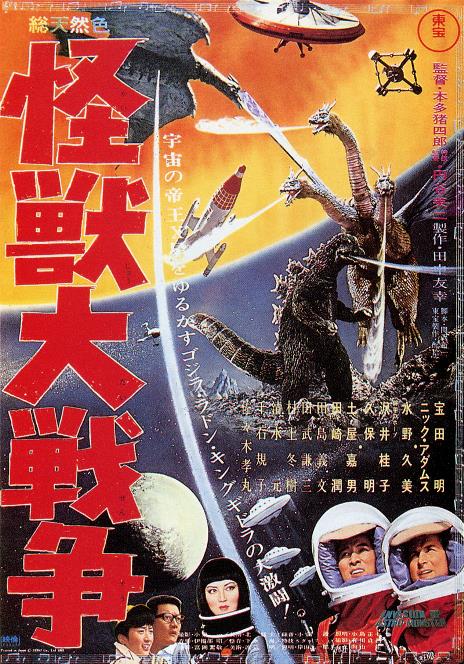 Invasion of Astro-Monster and Destroy All Monsters are the 6th and 9th entries in the Godzilla film series, as well as the 5th and 6th instance where Akira Ifukube provided a Godzilla score (it was also Toho's 20th overall giant monster film).  Interestingly, they both involve aliens taking control of giant monsters and using them against the Earth.  They also both feature King Ghidorah as the "final monster", after the humans turn the monsters back against their alien controllers.  For this reason it's logical that many of the alien themes introduced in "Invasion" return in slight variations in "Destroy".  In fact, it's very possible that the Xiliens and the Kilaaks are the same aliens, but from different time periods.  The mind boggles.

Invasion of Astro-Monster, 1965 (Also: Monster Zero, 怪獣大戦争, "Great Monster War")
This was the first Godzilla film in which aliens have a strong presence (as opposed to gangsters, foreign assassins or commercial entrepreneurs).  For this reason Ifukube was able to incorporate even more interesting textures.  In addition to the kaiju (giant monster) themes returning from Ghidorah the Three-Headed Monster (Ghidorah theme with tail, Rodan theme, Terror motif, Resurrection theme), Ifukube added the Monster fanfare (a stinger similar to the Monster cadence from Mothra vs Godzilla) and a new Monster Control theme.  The humans were assigned a new Monster Zero March, and the alien Xiliens were portrayed with suspense textures based on a Planet X motif and an exotic 7-note Xilien theme, both often making use of high string noises (sul ponticello), alto flute, xylophone, vibraphone, "wobbly" synth-like tones and muted brass.

The score to Invasion of Astro-Monster has seen several releases over the years.  The below table is based on the main score tracks from the Godzilla Perfect Box 2, Disc 1, which also includes 10 bonus tracks at the end (an alternate take and various takes of source music).


Destroy All Monsters, 1968 (怪獣総進撃, "Attack of the Marching Monsters") 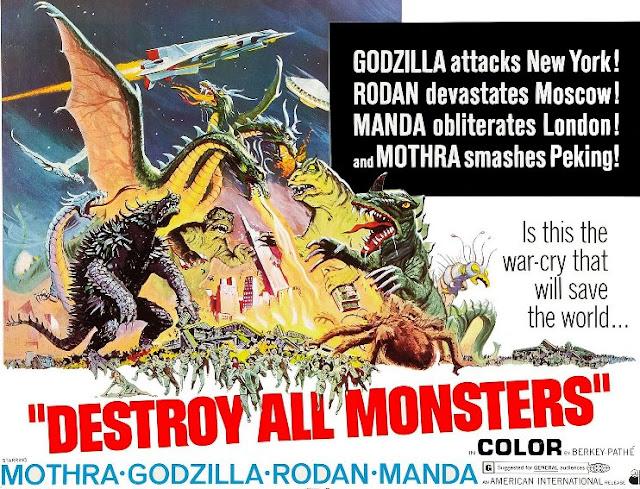 Ifukube returned and further developed the ideas he explored in Invasion of Astro-Monster (see above), especially textures related to alien invaders.  Even though there are 11 giant monsters appearing, Ifukube basically reused the monster themes he'd developed in the previous film (with some variations for Rodan's theme in particular and reprisals of Astro-Monster's Monster Control theme).

The new themes for the humans include the Destroy All Monsters March, the memorable "perpetuoso" Remote Control Destruction theme (derived from "Matsumoto City And King Ghidorah" from 1964's "Ghidorah, the 3-Headed Monster") and the Moonbase theme.  The Kilaak aliens receive the return of the Xilien theme from "Invasion" (perhaps they are related?), a Kilaak "choir" texture, a brief Escape theme and the Monster Land theme (all of which are more or less derived from the Xilien theme/scale).  A new Destroy All Monsters theme (Main Title, All Monsters Attack) rounds out the new themes.  The Planet X motif from "Invasion" also returns fairly frequently here, as well as the Monster Control theme (appropriately enough).  As usual, even though the themes for the individual monsters also recur fairly frequently, they are often written in different tempos and orchestrations.

The score to Destroy All Monsters has seen several releases over the years.  The below table is based on the main score tracks from the Godzilla Perfect Box 2, Disc 4, which also includes 11 bonus tracks at the end of retracked cues and alternate takes.  In the table below I put the retracked bonus cues in their chronologically-correct placement. 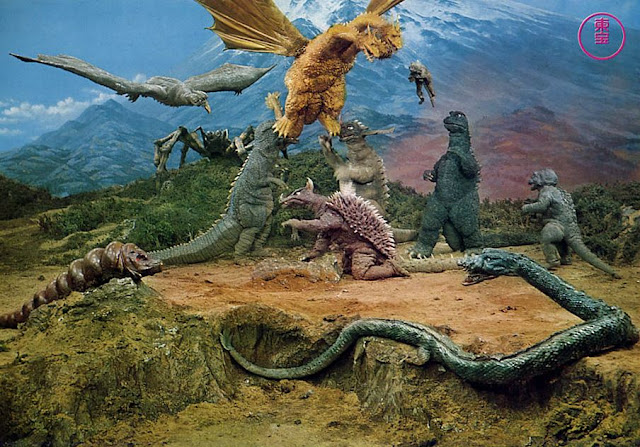