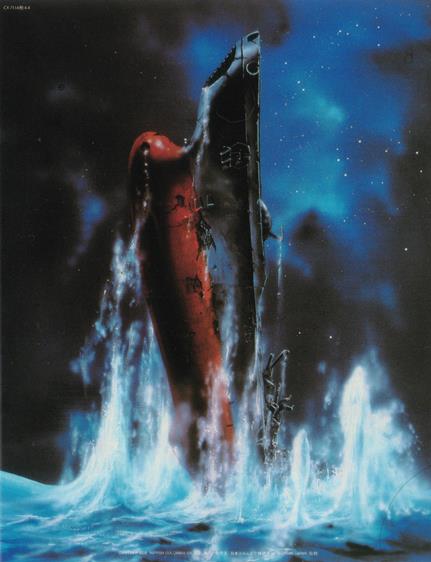 The final film in the "classic run" of the Space Battleship Yamato series was "Final Yamato" (Space Battleship Yamato: Final Saga: 宇宙戦艦ヤマト・完結編), which was also the longest animated film ever made, up to that time.  Suitably enough, it also has 5 full Sound Almanac CD releases attached to it (6 if you count the Music Addendum), amounting to a mammoth amount of music.  The film score and its many derivations were naturally again composed by Hiroshi Miyagawa (宮川泰) and pianist Haneda "Haneken" Kentaro (羽田 健太郎), who had worked so well on the previous Yamato scores. Some of the music (on Prelude to Final Yamato) was also arranged by Hiroshi Miyagawa's son, Akira Miyagawa (宮川 彬良), who would go on to work on all of the music for the post-millennial Yamato 2199. 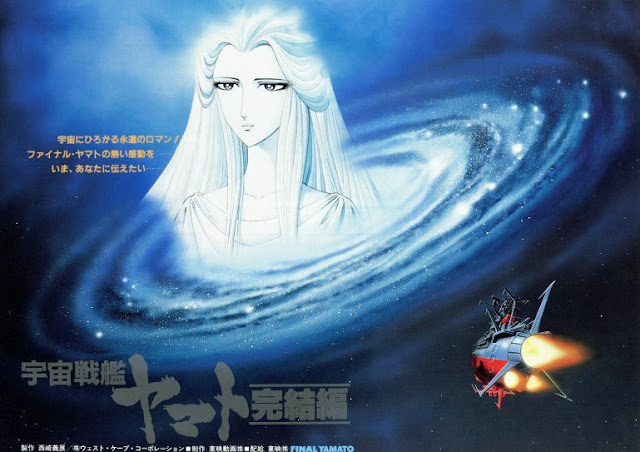 With so many hours of music, it's frankly astounding that the quality is as good as it actually is, though it does take a certain amount of fortitude and patience to digest it all (the guide below should make it much easier, though).  The material for the opening "galactic collision" and destruction of Dengil is epic and foreboding, and the sinister music for Uruk and its warlord rulers is suitably militaristic with a strong dose of Spanish-flavored acoustic guitar (OK, this I admit, might be a controversial touch, but it does sound pretty cool).  The Yamato's final sacrifice also gets an extended symphonic treatment, including a kind of piano concerto (which would be revisited in Yamato Resurrection with no less than Beethoven's own Piano Concerto 5!).  Many of the smaller chamber arrangements of the themes are also actually very delightful, and there is less synthesizer used here than in the previous film.  The new themes for this installment include melodies for Planet Aquarius, Shima's sacrifice, Yuki's sorrow, the Dengil Empire, General Lugarl, Kodai and Okita, the Dengil Boy, and Yamato's Funeral.  As usual there are a few new action cues based off of iconic Yamato motifs. 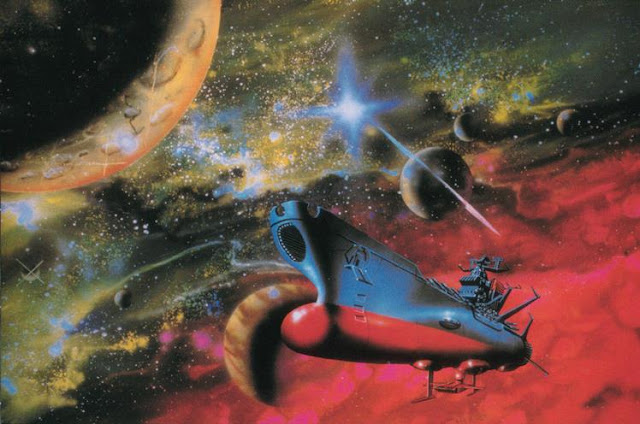 The film story itself describes a water planet, Aquarius, which wanders through the universe in a galactic orbit, spreading water to various planets and thereby giving life (or destroying it, if life existed there beforehand).  After the planet Dengil is flooded (coinciding with the collision of two galaxies), Dengil Emperor Lugarl decides to warp Aquarius to Earth 6,000 years ahead of schedule in order to flood it and then emigrate there.  The Yamato investigates and defeats the Dengil conquerors on their massive city-satellite Uruk. Unfortunately, Aquarius has already been warped to Earth, so the Yamato is used as an interplanetary floating bomb to disperse the water spout from Aquarius, thus saving the Earth.

Since the initial release of the film was somewhat delayed, fans in 1982 were treated to a "Prelude (Overture) to Final Yamato", which was a kind of narrated "image album" (music inspired by) related to the overarching ideas of the Final Yamato story.  It begins with ancient Yayoi flute music of Japan, leading to modern music (honoring the Japanese battleship Yamato), and then ends in a collage of iconic music cues from the entire Space Battleship Yamato series (with producer Yoshinobu Nishizaki himself speaking on the last track).  The Sound Almanac version includes the original version with narration over the music, but the Music Addendum set includes the Eternal Edition version without the voice-over layers.  Tracks 4, 5 and 7 were used in the final film score (without the narration of course). 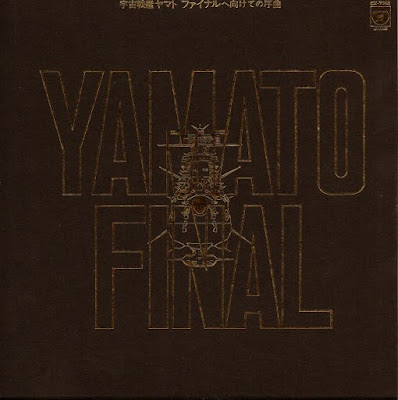 
The "Final Yamato" film's release was accompanied before and after by three "Music Collection" (MC1, MC2, MC3) albums released by Columbia, and two "Theme Music" albums from Tokuma/Animage.  These consisted of more "image tracks", symphonic concert versions, alternate chamber arrangements, and some cues actually used in the film itself.  These five albums are all collected on the three Sound Almanac Final Yamato Music Collection releases.

The first of the three Collections explores some of the new themes for the characters and races.  Tracks 1-10 are the same as the Columbia MC1 release, with the last 3 tracks from the Tokuma Theme albums (which I don't have, hence the sparser descriptions).  All of the tracks with headers in parentheses are unused in the film (for example, tracks 3-6, etc. below).  Prior to the film's release, the story was presented on an overnight radio dramatization, and music exclusive to this production is also noted below.

The second collection has pieces which are arranged somewhat in film sequence.  Tracks 1-13 are the Columbia MC2 release, and the last 3 tracks are from the Tokuma Theme albums. 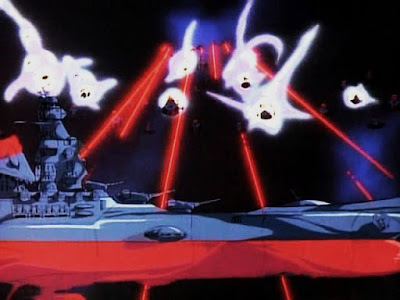 
The third volume includes a few so-called "easy-listening" style arrangements of themes, but otherwise has the same symphonic suite concept as the other two Music Collections.  Tracks 1-11 are the Columbia MC3 release, and the last 3 tracks are karaoke versions of 3 songs.


The fifth Sound Almanac release is the film score itself (BGM), of which almost every track was used in the film.  At the end are some bonus cues which were only used for some LVD arcade games in 1995. 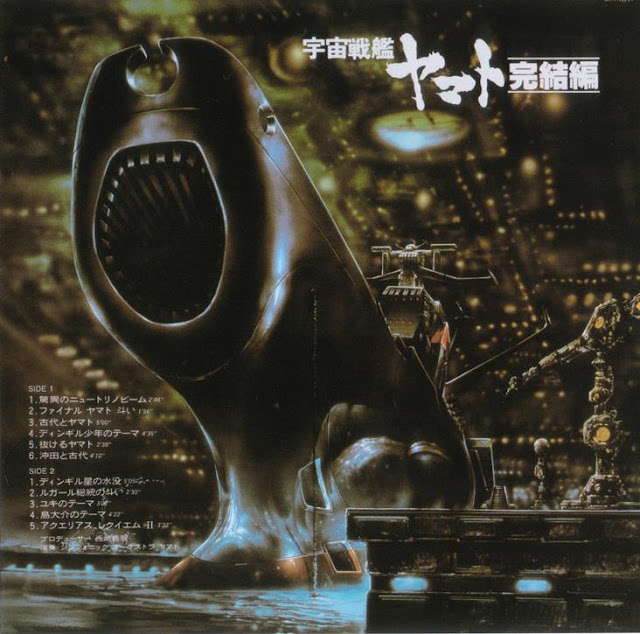 The actual sequence in which tracks from the above 5 albums were used in the film can be seen below (with a good helping of thanks to CosmoDNA's article on Final Yamato's music).  Retracked music from previous albums are noted in between the tracks (bottom of rows).


Tracks Used in Film Sequence
(FYI: Many tracks are edited versions, for example MC1.2 beginning is edited into BGM 28) 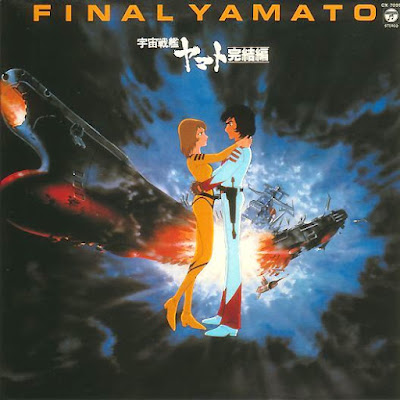