The Television Series
In 1974, the animated television series "Space Battleship Yamato" (Japanese: 宇宙戦艦ヤマト) premiered in Japan.  Although not an immediate hit, it later became a massive pop culture phenomenon, and a few years later was dubbed in English and programmed in the United States as "Star Blazers" (where it accumulated many more fans, including myself).  The first season of this show portrayed the adventures and struggles of a naval "Star Force" as it traveled to the faraway planet Iscandar, hoping to bring back a cure to a radiation disease which was being visited upon the Earth by hostile aliens, the Gamilas ("Gamilons").  The namesake ship, the "Yamato" (renamed the "Argo" in the English version), was basically a refurbished WWII battleship, retrofitted with alien (Iscandarian) technology in order for it to be able to travel intergalactic distances.  In contrast to previous animated programs, the show was written to appeal to adults as well as children, and featured complex, mature themes as well as more realistic battle scenes.  Perhaps most uniquely to American audiences, it also played out as a serial, with episodes continued on from each other - in other words, a space opera. 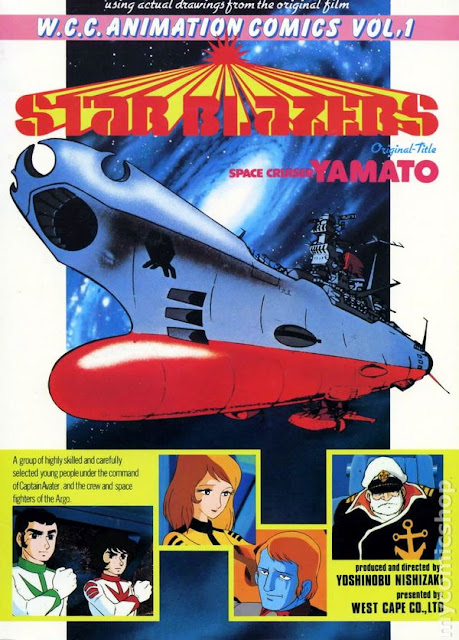 The Score Releases
The music for Space Battleship Yamato was composed by Hiroshi Miyagawa, who started his career gaining notoriety for his jazz and pop-inflected compositional style (an excellent overview can be read at CosmoDNA).  However, his greatest claim to fame is easily his Space Battleship Yamato music, and his music cues here are as instantly recognizable to fans of the show as the music of Star Trek or Star Wars is to fans of those programs.  Essentially consisting of 3 seasons of TV, one telefilm and 2 original film features, Space Battleship Yamato has a long and varied discography, but there have been 3 main "editions" of soundtrack collections in the last 20 years or so.

In the mid-1990's, Columbia Japan released a series of CDs basically reproducing LP releases from the previous decade.  These are sometimes referred to as the "BGM" (background music) series.  Consisting of 6 score CDs, these releases gathered a selection of cues from each series or film and often sequenced them by musical themes or moods.  For example, on the "Yamato: New Journey" BGM release, 5 versions of the "Goruba" theme are grouped together, followed by 4 variations of the "Parting" theme.  This created a sense of "musical suites" based on melodic ideas or moods.

In 2000, a much larger amount of music was released in the form of the "Eternal Edition" series, which spanned 9 discs of film score (now organized in chronological sequence), 2 discs of vocal songs, and 1 orchestral "image" disc (basically a kind of  symphonic "music inspired by").  The only drawback to the Eternal Editions was that most of the cues were often grouped together into single tracks of 2 to 5 cues.  Another unique feature here was that in productions where original score was complemented with tracked music from a previous film or series (such as Eternal Edition 2/3: Farewell to Space Battleship Yamato), unlike most Western soundtracks, these score releases included the previously-released material.  In fact, if a cue was reused in the same film, it would actually be included a 2nd time on the same soundtrack.  One could consider these to be basically a "isolated scores".

Starting in 2012, the "Sound Almanac" series was begun, and this iteration is probably as comprehensive as Space Battleship Yamato music will ever get.  Ultimately spanning 30 CD releases (and 1 recent triple disc "addendum"), this effort included both expanded film score editions (with essentially all cues individually indexed) as well as symphonic rearrangements, synthesizer arrangements, live concerts and even "story" productions (including dialogue and sound effects).  Cues tracked in from previous productions were not re-included (ie - no repeats), leaving more room for unreleased original score.  This round of releases is also notable for being easily available to residents of the US, since they are all downloadable from the iTunes store for a very reasonable 9.99 per album.

The Space Battleship Yamato's "classic period" was presented in 7 productions between 1974 and 1984 (as mentioned, 3 seasons of TV, one telefilm and 2 original film features).  The below links lead to pages dealing with each of these 7 features in detail.