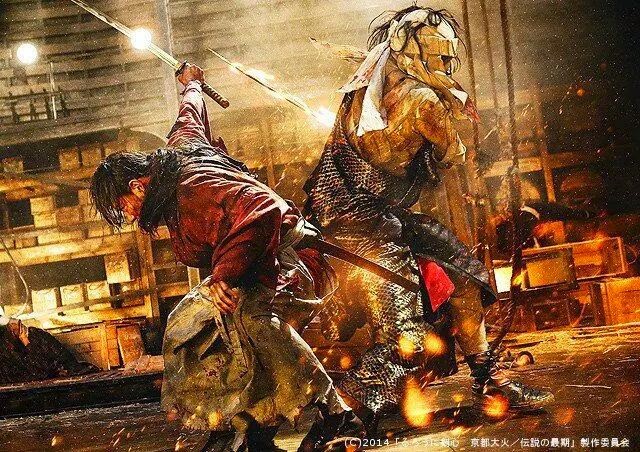 The 2014 2nd and 3rd films of the Rurouni Kenshin live-action film trilogy make up a single massive story in two parts.  In this 4.5 hour epic, the former "manslayer", Kenshin, is called out of peaceful rural retirement in order to defend the "new age" against the nefarious plans of the betrayed assassin Shishio, and his army of mercenaries.  In the first part, "Rurouni Kenshin: Kyoto Inferno" (るろうに剣心 京都大火編), Kenshin makes new friends in Kyoto, and has separate confrontations with Sojiro and Cho, two of Shishio's lethal swordsmen.  After a successful defense of the city of Kyoto, Kenshin nonetheless winds up defeated and washed up on a beach, with his friends in a bad spot.  In the final film, "Rurouni Kenshin: The Legend Ends" (るろうに剣心 伝説の最期編), Kenshin reunites with his old teacher, discovers new insights about himself, and eventually finds new allies to help him defeat Shishio's plans for nationwide chaos. 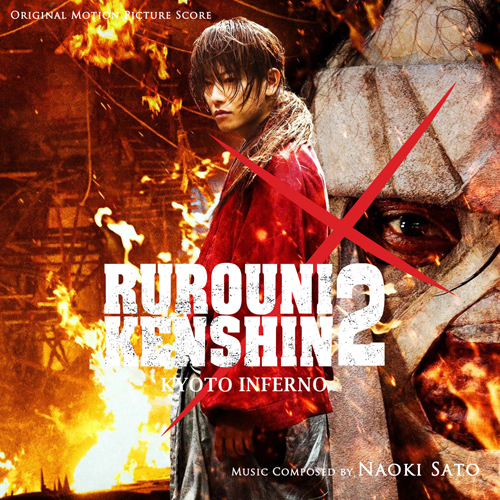 Rurouni Kenshin: Kyoto Inferno
In the first Rurouni Kenshin film (2012), composer Naoki Sato featured the skillful use of ethnic instrumental soloists (oud, bansuri, fiddle) over ambient electronic textures.  For the sequels, many of the tracks from the first were retracked, and though these don't always function as character-specific "themes", they do serve to create a consistent sound-world across all 3 films.  Sato of course also composed many new cues, and these provide musically thematic material for the new characters and new locales.  Shishio gets an epic "Fate" theme, as well as a recurring texture for scenes at his battleship hideout ("Scene of Carnage").  New arrangements of themes from the first film also appear ("No Killing", Kenshin's theme, "Karaku's Dream").  Basically, familiar musical elements from the first film reappear in old and new guises, mixed with brand new themes and textures.  The featured ethnic instruments in "Kyoto Inferno" include the sho, koto and shehnai (harmonized), as well as some new electronic grooves and more electric guitar.

Rurouni Kenshin: The Legend Ends
In this final installment, Sato concentrates more on heroic action grooves and textures than in the previous films' scores (though "The Legend Ends" does retrack some material from "Kyoto Inferno").  In some sense, this is also a somewhat more conservative score (not so many ethnic solo improvisations), but this approach better suits the epic nature of the story.  There also isn't much in the way of new character themes except for the "Master's theme" (an ostinato-driven, fateful string texture explored in the first part of the film), but considering that this film is the continuation of the previous entry, it wasn't really necessary to create much brand new character material.